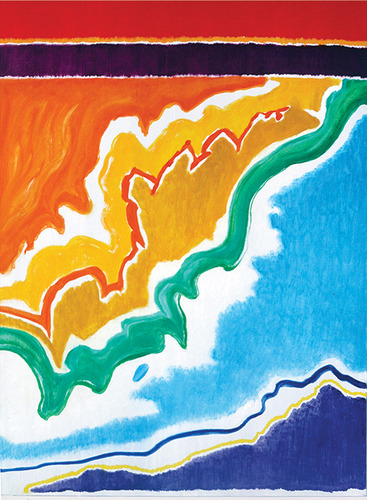 Chromatic Space is the third of three exhibitions held this year in celebration of the eightieth anniversary of American Abstract Artists. This exhibition seeks to illuminate the ways that artists use color to explore the possibilities of depth, scale, atmosphere, and movement, and to create the content and iconography in their work. From the rigorous flatness of hard edge painting to the celestial expanse of color field work, the use of color activates a work of art in an exciting variety of ways.
In the process of making their work, artists create their own visual language, and provide the framework for the viewer’s experience. Consider the different look and feel of two solid planes of color abutting, two brushstrokes overlapping, or two poured colors bleeding into each other. Out of the relative simplicity of these gestures, work as different and complex as the paintings of Ellsworth Kelly, Joan Mitchell, and Morris Louis are made. The dialogues of surface and depth, translucence and opacity, movement and stasis, are played out through the use of color in the work of each artist. 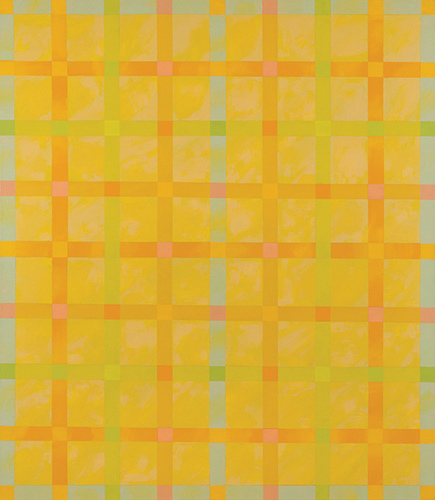 Abstract art does not seek to represent a specific image from the observed world—a figure, landscape, or still life—though some works find inspiration in the material realm. In dispensing with the traditional subject in their work, these artists present instead the object of the painting itself: the act of applying paint to surface, and the exploration of the properties of color. Sculpture exists more evidently as an object, a three-dimensional entity occupying the same space as the viewer, and can present color as a tangible reality that can be circumnavigated and explored. In either case, looking at an abstract work of art offers you a visual experience, and allows you to become aware of the act of seeing; the physical, sensual, and mental aspects of the experience of sight. The image takes place in your mind as well as in the work itself, and this process of interaction and discovery provides much of the dynamism of encountering a work of art. This process is true for representational art as well, but traditionally it was not considered central to the experience; abstract art brings this encounter to the fore.

Looking at the history of American Abstract Artists, it is interesting to note that the organization was founded during the same ten-year span that saw the three major modern art museums in New York City open their first exhibition spaces. The Museum of Modern Art opened in 1929; the Whitney Museum of American Art was founded the following year and opened its first gallery on West Eighth Street in 1931; and the Solomon R. Guggenheim Foundation was created in 1937 and opened its Museum of Non-Objective Painting in 1939. At both the institutional and the grassroots level, people were grappling with abstract art. American Abstract Artists sought to respond to the non-acceptance of abstract art among the general public and to be a proponent of specifically American abstract art in the museums, which were much more focused on the work of European abstract artists. 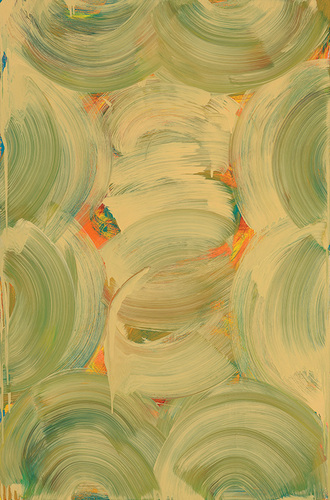 Over the course of time, as abstraction found greater acceptance among critics and the mainstream, the number of possible modes of expression in abstract art continued to expand. New categories proliferated—Action Painting, Abstract Expressionism, Post Painterly Abstraction—typically named and promoted by art critics and historians, to encompass the variety of ways that artists found to express their ideas. Painting led the way forward; sculpture largely lagged behind until the 1960s. That decade saw an enormous expansion in the possibilities of modern abstract sculpture and such landmark exhibitions as Primary Structures at the Jewish Museum and Eccentric Abstraction at the Fischbach Gallery in 1966, and Sculpture in Environment, a citywide show of sculpture in 1967. The 1960s also saw early examples of Happenings, Conceptual Art, and Land Art, as the art world expanded out into the world, beyond the gallery and the museum, and beyond painting and sculpture. The overall trajectory of the last 80 years has been towards an art world that is more fluid, open-ended, and encompassing.
Today, one no longer needs to defend abstraction as an outlier, but rather can celebrate the remarkable variety of work it now encompasses and the ever-greater range of materials and practices it embraces. American Abstract Artists has always valued community and history, and it is a pleasure to be part of celebrating the work of these artists, and the accomplishments of the organization over the past eight decades.